When to Use Hockey Training Aids 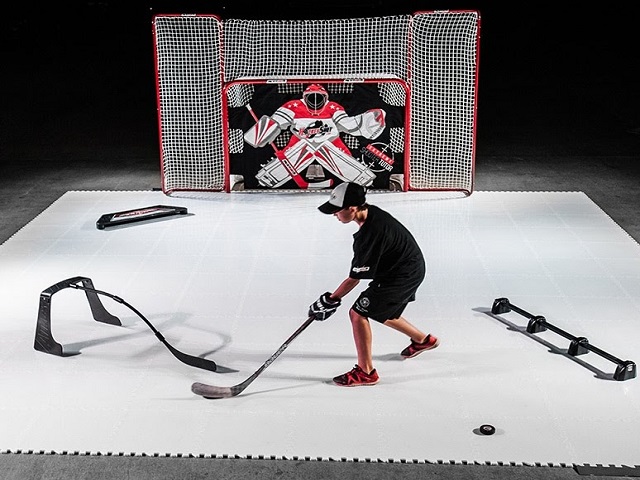 Training is one of the most important parts of hockey. It can make the difference between winning and losing in any normal game, and can generally make you a harder player to deal with. One thing that a lot of hockey players try to bolster their skills is hockey training aids.

Even though these training aids are absolutely incredible for ensuring that you’re getting the right kind of training, a lot of people simply don’t know when it would be the right time to use them. It can be a little confusing to decide the appropriate times to implement training aids.

Of course, with some practice and awareness, you can make sure that you’re using your training aids in the right place at the right time. But, until then, how does one figure out when to use training aids? It can be hard to know when you’re starting off from scratch, and we’re here to help.

There are a lot of types of training aids, so today we’re going to be looking at a few specific ones and when it would be the right time to use them. This won’t be an exhaustive list, mostly because such a list would take more time than anyone has for this article, but we can give you a good jumping-off point.

There is a concept that has been used in fitness for decades, and that concept involves making simple tasks a bit more difficult by adding some resistance. In fact, there’s a good chance that you’ve done resistance training in some way, shape, or form throughout your fitness journey.

There are a lot of kinds of resistance training. You can strap weights to your wrists, ankles, and even body. There are also a variety of resistance bands available on the market that can be used in a variety of different exercises to help you with building various muscle groups.

This principle has made its way into hockey training tools by the means of hockey stick weights. These weights can easily be slipped onto your normal hockey stick to add a bit of weight to your stick. That helps you with building strength, but it also helps you with your stickhandling skills.

When you get used to the extra weight on your hockey stick, it will feel lighter when you use the stick without the weight. That means that you’ll be able to move your stick around with a lot more ease, making you a much bigger threat on the ice.

There are a variety of times it would be the right time to use a hockey stick weight. For example:

Hockey stick weights are incredibly versatile, so you could reasonably use them any time you pick up your hockey stick other than in games. That makes them incredibly powerful hockey training tools that anyone could pick up and use, no matter what position they play.

Let’s face it, hockey games get pretty chaotic. There are a bunch of people scrambling around that all have the same goal, getting the puck into their opponent’s goal while keeping it out of their own goal. By default, that’s a recipe for some chaos on the ice.

Because of that, it’s important to be sure that you’re able to quickly make accurate passes to your teammates. If you can’t do that, you have a higher chance of your opponent intercepting the pass and making their way towards your goal. That won’t work for you and is probably the last thing you want.

Enter the puck passers. Puck passers are small metal triangles with rubber edges. These little aids are designed to help you get better at passing and receiving the puck. All you have to do to use a puck passer is set it up and hit the puck against it. The puck will bounce off, and you just have to retrieve it at that point.

That makes the puck passer an incredible tool for honing your accuracy, which will translate to much better plays during games. That’s important if you want to win more games and be a more valuable asset to your team.

There are a lot of times when you can use a puck passer:

While puck passers aren’t as versatile as hockey stick weights, they can still be used in a variety of situations. They make for very good passing practice and many people that use them swear by them. Because the puck passers are triangular, you can even get drills going with three people, even more people if you want people to run interference for a more accurate simulation.

Balance is an important thing for daily life as well as for hockey. If you don’t have good balance, you might expect to take some pretty nasty falls by accident. That’s not fun when you’re on the ice in the middle of trying to play a game.

Even in everyday life, balance is important. Imagine trying to bring in groceries with different weights in both arms and you just fall because of it. Of course, that’s an extreme example, but if your balance is bad enough you won’t even be able to stand up straight.

As a hockey player, it is impossible to be too well-balanced. The better your balance, the more precarious positions you’ll be able to save yourself from without landing right on the ice. Ask any professional hockey player, having good balance is key for being a good hockey player.

That’s why so many hockey players use balance boards. These boards are made up of two components. A board, and a plastic tube that is called a roller. All you have to do to properly use a balance board is put the board on the roller and stand on top of the board.

A lot of hockey players will even use their hockey stick in tandem with the balance board, making it another opportunity to use your hockey stick weight. That makes it great for working a lot of skills at once.

While there might not be as many situations where it would be appropriate to break out your balance board as there are for other things, there are still a lot of benefits to be enjoyed from the use of these balance boards as someone who plays hockey on a regular to semi-regular basis.

These are probably the simplest of the aids that we’ll be looking at today. A street puck is any puck that is designed to work well on the asphalt. These are good in a variety of situations, but not enough to really justify another list like we’ve been doing.

Street pucks come in a variety of shapes and sizes, but most of them are about the size of a regulation hockey puck. They have special grooves on the bottom that allow for them to move smoothly on the asphalt.

You can even get street hockey games going when using a street puck, which is great if you want to get some off the ice group training in with your friends, family, or even teammates. Street pucks can help with all sorts of skills, but namely things like stickhandling and accuracy.

Get the Best Training for You

Training to be the very best hockey player you can be can take a lot of time. Fortunately, there are tools that you can use to help you reach your goals more quickly. It doesn’t matter if you’re a new hockey player or someone with decades under their belt.

The best part about hockey is that you can almost always find people around your skill level to play with, depending on where you live. There are some pretty accommodating hockey teams out there that can help you play the sport that you love so much in most cases.